Birth of the Dacia brand

The Dacia brand name comes from “Dacie”, the land of our Romanian ancestors.  A licensing agreement is signed with Renault. Dacia’s mission is to make modern, robust family cars available to everyone in Romania. 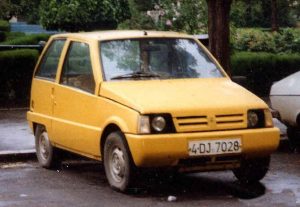 1999: Dacia becomes a Renault Group brand. Renault purchases Dacia and radically modernises the historic Pitesti plant. It marks a new era of quality for the brand. The harsh Romanian climate, the poor state of its roads and the large distances required to cross the Carpathian mountains mean that vehicles must be extremely reliable.

Dacia and the Renault Group

2004: Dacia France launches the “Logan” family saloon, an icon for the brand revamp. The following year sees all production records broken. The range in France is subsequently expanded to include the Logan MCV in 2006, Logan Van in 2007, Logan Pick up and Sandero in 2008 and Duster in 2010.

2011: Dacia gains over 340,000 new customers in just one year, and the Pitesti plant is now operating at full capacity. The Somaca (Morocco) plant comes to support the historic Pitesti plant.

2012: Since it’s arrival was announced in July 2012, Dacia has brought a full range of affordable cars to the UK market. Dacia set out to offer functional, cleverly designed cars, at affordable prices, reliability with proven engine technology, robust and built to stand the test of time.

2013: Dacia started to make its mark on the UK car market with the Duster arriving in January 2013, an impressive vehicle with 4×2 and 4×4 options available. UK most affordable and best value car, the Sandero was second to arrive on the UK shores and offered impressive cabin space for up to five adults.  The Sandero Crossover Stepway, its bulkier sibling arrived in November 2013 and has all the style of a SUV and all the practicality of a family hatchback. The Logan MCV arrived in September 2013 with its large 573 litre boot.

2015: The Duster Commercial version launches with competitive pricing as well as a bigger luggage volume in excess of 1650 litres. All Dacia engines come with a standard 3 Year / 60,000* mile warranty, extendable up to 7 Years / 100,000* miles, with flexibile finance options available through Dacia Finance.